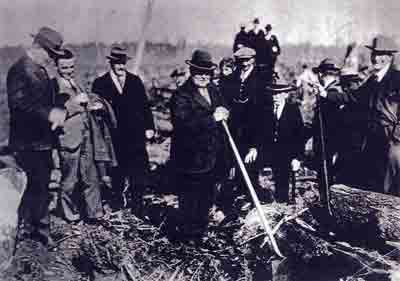 Green Timbers Urban Forest is unique in that it consists mainly of tree planted from seedlings in the first attempt at reforestation in British Columbia. It consists of a square mile of forest located astride Fraser Highway facing Mount Baker. Originally this was the Yale Wagon Road to the interior, built by a company of Royal Engineers in 1875. In 1923 it was renamed the Pacific Highway when Surrey was linked by road to Blaine in Washington State.

Set in the centre of Surrey’s urban development, Green Timbers once belonged to a forest of giant trees which spread over 5,000 acres. Until 1929, people travelled from afar to view the 200- foot timber that lined the highway. After completion of Pacific Highway, it became famous as the only remaining stretch of virgin forest all the way from San Diego to Vancouver. As early as 1860, attempts were made to have the area designated for park purposes.

Nevertheless, all 5,000 acres were clear-cut. The last giant trees were felled in 1930 despite a campaign to save them. Sadly, dignitaries were on hand to witness this historical event. Thus ended seven years of logging by King and Farris Company, which had used Surrey’s Green Timbers to feed their Newton based sawmill. Reforestation was begun by the BC Forest Service. The occasion was observed on March15, 1930 with the planting of an Inaugural Plantation which still stands today. Planting continued through the “dirty thirties”. An Arboretum of foreign trees, a group of Garry Oak and a plot of Eastern Red Pine were added for experimental purposes. A forest nursery and forestry training and education centre were established.

The forest is home to many species of animal and birds, as well as plants, like the protected Western Trillium and the rare Rattlesnake Plantain and Coral-root Orchid. It is the source of King Creek which flows into Bear Creek and eventually into the Serpentine River.

In 1966, 33acres of the forest reserve became the site of Douglas College. In 1970, 400 acres were transferred by a trade to The City Of Surrey. 100 Avenue was cut through a few years later, separating 40 acres to the north, and 96 Avenue was widened and extended to 140 street.

In 1987 there was a public outcry to save 42 acres which had been cleared for a sports complex. The Green Timbers Heritage Society was formed to save this area as part of Green Timbers. In its efforts it attracted a 1,000 strong membership. After eight years of lobbying, the 42 acre area has now been designated as part of Green Timbers with a lake and wetland added by broadening and deepening King Creek. Hundreds of trees have been planted there, including about thirty indigenous plant species which are new to the forest.

Today, including the Ministry of Forests area, the Green Timbers forest covers a total of 560 acres. It is a mix of the remnants of reforestation and natural regrowth. As a natural heritage, it is potentially one of the most spectacular urban forest in Canada.

Our Growing Forests in North Surrey 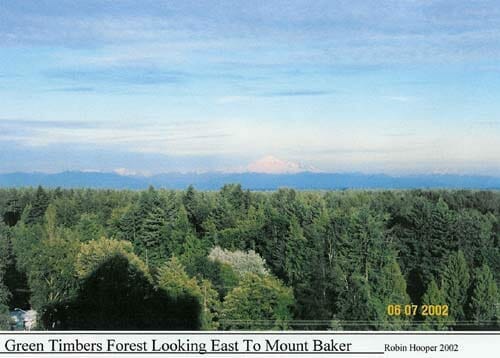 The year 2006 has seen a large increase in the forested land to be administered by Surrey Parks in partnership of the Green Timbers Heritage Society, and other environmental groups. 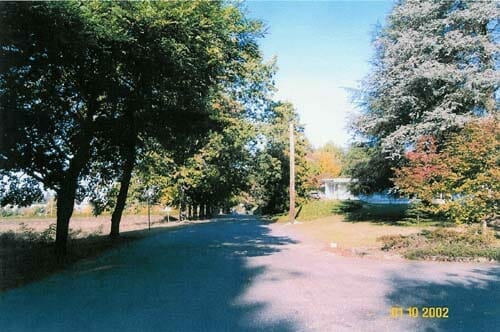 The entrance to the Arboretum from 140th street 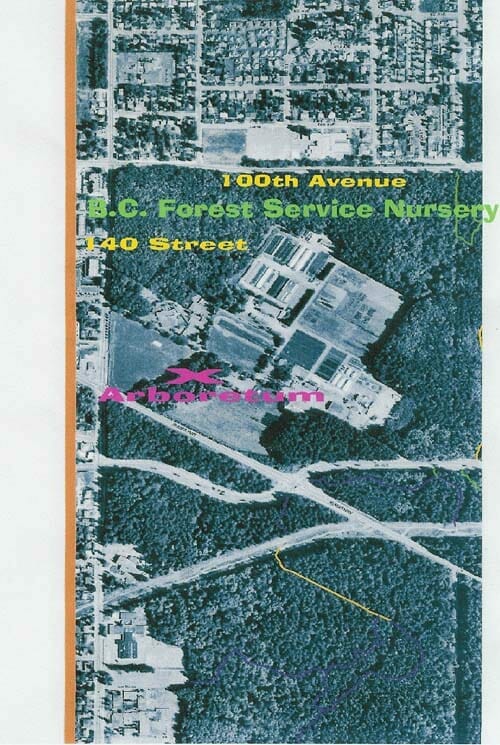 An Aerial View of BC Forestry Nursery and Arboretum (in purple)

Green Timbers Heritage Society has worked for many years with the Ministry establishing a Commemorative forest, maintaining the Inaugural plantation and identifying and marking trees in the Arboretum.

The Arboretum is a small forest of 140 species of trees from around the world. The trees were planted in the 1930s, and to-date seventy-seven species have survived. Of these, 130 trees have been identified, posted, and marked by the Green Timbers Society. 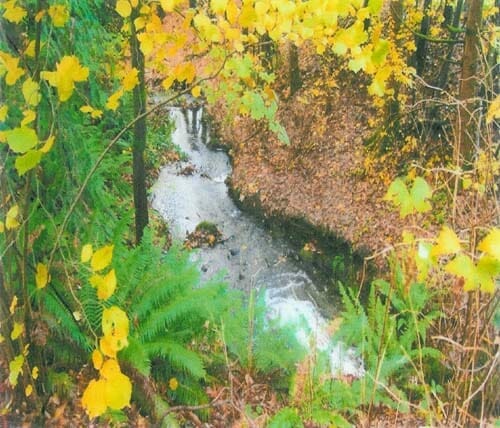 In fond memory of Bela Sivak who spent many days identifying the different species of trees that have survived in the Ministry of Forests Arboretum in Surrey, BC. Bela tied Jn June 2005.

Bela was a respected forester, teacher, and member of the Green Timbers Heritage Society. 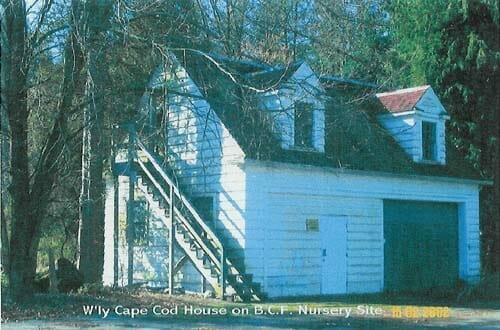 A heritage house built in 1930 by the Forestry Ministry, near the Arboretum.

Ellen came across this poem from one old friend to another when they were saddened by the loss of natural habitat in the early 90s. They were friends for close to 80 years…and called each other, Jake and Joe. John died 2003, age 89 and Harry 2005, age 92. They grew up in various parts of Surrey, and knew it well. Today, Ellen is sure they would have been pleased with the way that the Green Timbers Heritage Society’s projects have brought new life to the forest and the creeks. This poem is printed by hand on a slice of vine maple that Harry gave to John. On the back are two marks in the wood that look like tears, so Harry carved out two eyes and a sad mouth…to complete his message. This poem was forwarded by Ellen Edwards, daughter of John Tompson, remembering the days of her roots, at Bear Creek…

In 1926, many years ago,
Two lads met, Jake and Joe.
By Bear Creek, crystal clear,
There roamed the bear – the deer.

In spring stood a doe with new born fawn,
In fall, salmon swimming up to spawn.
In 1925 after the big slash fire,
Wild blackberries and fireweed –
Blossoms to admire.

The two boys walked the trail
At the back,
On rainy days, playing in Jimmy’s shack.
On the trail where they took their hikes,
Passing Mr. Nixon’s old ram pikes.

The bridge over Bear Creek,
Constructed of logs,
At night hearing the sound of the frogs.

Now what do Jake and Joe think of this?
All that remains –
Memories to reminisce.